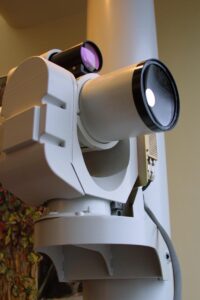 The model ETX-125TB OTA (optical tube assembly), was a white painted version of the very well made blue anodized Meade ETX-125 Maksutov-Cassegrain telescope. In the Terabeam application, the ETX-125TB OTA was mounted in a gimbal and used as the receiving aperture for the Terabeam SAT (Single Access Transceiver) product. The SAT device was a near-infrared laser transceiver that was used to create point-to-point communication links through office windows, using the air space between buildings. The SAT transmitted data at a rate 125 megabits per second and received data at rates up to one gigabit per second.

Terabeam installed the SAT into free space laser communications networks in many cities including New York, Seattle, Denver, Los Angeles, and Dallas. Unfortunately, the a Terabeam link was tens of thousands of dollars more costly than lower bandwidth microwave transceivers. After the telecommunications bubble burst in 2000, there weren’t many customers willing to invest in a free space laser internet connection, and in response to these changing market conditions, Terabeam developed the smaller and less expensive Elliptica transceiver (shown below).

In the first few months of 2004, Terabeam Networks merged with radio frequency solutions provider YDI wireless (now Proxim Wireless). As a result of the merger, the Terabeam laser transceiver products were discontinued. The SAT transceivers and the unused inventory of Meade EXT-125TB telescopes soon found their way to internet auction sites.

Since the ETX-125TB was originally meant to integrate into the Terabeam SAT, there were no Meade black plastic backs or mounts provided to Terabeam with the telescopes. As a consequence, there was no need to machine the outer diameter of the rear of the aluminum tube to allow for the plastic back to easily slide onto the ETX-125TB. The focus shaft was also shortened for the SAT application which prevented the use of a focus knob if one was able to force a Meade black plastic back onto the rear of the EXT-125TB. To make the ETX-125TB useable once again, Wegat Optical developed an adapter that would allow owners of these telescopes to attach 2-inch accessories like those used on Schmidt-Cassegrain telescopes. Similar adapters were also created for the Meade ETX-90 and ETX-105 telescopes of the same era, but with the notable exception that while the ETX-105 adapter allows for use of 2-inch Schmidt-Cassegrain accessories, the EXT-90 compatible version of the Wegat Optical adapter retained the ability to attach the smaller Meade ETX accessories. 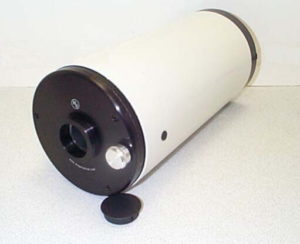 The White ETX-125TB Catadioptric Maksutov-Cassegrain telescope was originally designed, built, and aligned by Meade Instruments for Terabeam Networks in 2000. Although similar to Meade’s commercial telescope, these OTA’s include several quality upgrades.

The ETX-125TB OTA is suitable for use in laser communications, LIDAR, astronomy, astrophotography, and general photography applications. With a weight of about 8 pounds, it makes a great “grab and go” telescope.

Wegat Optical has since designed a Meade ETX-90 adapter that allows for the use of standard ETX accessories and a Meade ETX-105 adapter that allows for use of 2-inch Schmidt-Cassegrain accessories. By removing the focus knob, black plastic back, and fork mount from the optical tube assembly, a Wegat Optical adapter can be easily attached to any Meade ETX-125 telescope, ETX-105 telescope, and most ETX-90 telescopes manufactured prior to the Meade Observer Series.

Questions or comments? Let us know!